When I cook, I like to serve a variety of dishes so that each meal will have a variety of contrasting but complimentary flavors, textures and temperatures.

With many meals, that simply means that I put a nice green salad on the table with my entree and some bread. But, a salad made out of lettuce just doesn't seem to "go" with most Asian-Style meals.

Inspired by the actual salads I have enjoyed at Asian restaurants over the years, I created this simple salad. It became a huge hit at our house!

Here's how to make it:

Toss & Serve
*If you have them handy, you could sprinkle on a few Sesame Seeds, too

This dish is best chilled, but usually cucumbers are in the fridge anyway, so that detail takes care of itself.

This post is being shared on:
Hello Monday
Inspire Me Monday
Melt in Your Mouth Monday
You're the Star
Modest Monday
Happiness is Homemade
Tasty Tuesdays
Food on Fridays
Posted by Anna@stuffedveggies at 8:00 AM No comments:

The Best Chef's Knives - With the Least Money

There is a popular opinion that spending more on a Chef's Knife, will enable you to become a better
cook than you would be with cheap, ordinary knives.

For a long time, I bought into that opinion.

As a young person, one of my first jobs was in the housewares department of a higher-end department store. I became familiar with the better brands, and how amazing they were.

And, in fact, I own some "great knives." Some of them were gifts, and I love them for sentimental reasons. They have a "steel" that you can use to keep the cutting edge in perfect condition. And, of course, you'd never put them in the dishwasher!

But, on a recent adventure, I left my "good knives" behind, and decided I could wing it with "cheapies" for a short period of time - a few months. I  started out with an 88cent model - one of those things that could serve double-duty as either a kitchen knife or a saw. It worked well enough to get me by for the short term, but was no joy to use.

Then, one day, I was shopping at the Dollar Tree, and saw a Santoku 7" Chef's Knife, and decided to splurge and upgrade - after all, it was only $1! What could go wrong?

I brought it home, and was quite pleased with it! It cut nearly as well as my "good knives!" And, it was CHEAP!

But, of course, it wasn't long before it wasn't cutting so well. So, I bought another one for backup - because I could see this wasn't going to be a long-term solution.

Then, I thought about knife sharpeners. I had always been told that you could ruin a good knife by sharpening it with a home sharpener. And if you sharpened a knife too often, or too ambitiously, you'd wear the blade away! (To prove it, we had a family hand-me-down in a drawer that had met with that exact fate - and could nearly double as a toothpick ; )

But then it occurred to me - these are $1. knives. So WHAT if I ruin them with a cheap sharpener?!

So, I ordered one from Amazon. The locally available sharpeners at the national retailers were "too rich for my blood" ; ). This is the one I bought - by "Smith's" 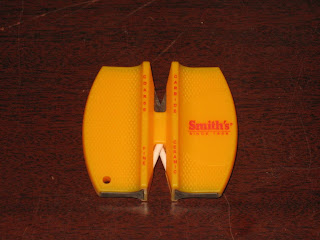 And, I honed my $1. knife.  First with the coarse edge, then with the fine edge.

Guess what? It has turned into - hands down - the most effective knife I've ever owned!

I "over sharpen" it - nearly every time I use it, I run it thru the fine edge - just two or three times.

I can put it in the dishwasher if I want (tho, usually, I DO wash it by hand, just out of habit).

Instead of a knife block (who has that kind of counter space?!), I made my own sheaths out of cereal box cardboard. 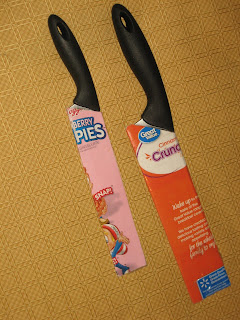 This knife is a dream to own, and a pleasure to cook with. And, is embarrassingly cheap ; )

I haven't had to open the "back up" knife! BUT - I did buy an additional one in a smaller size to use where a smaller knife is better.

This post is being shared on:
Penny Pinching Party
You're the Star
Modest Monday
Hello Monday
Tuesdays with a Twist
Happy Now
Home Matters
Modest Monday
Posted by Anna@stuffedveggies at 8:00 AM No comments:

No Knead, Easy, Vegan Greek Easter Bread (Tsoureki) Traditionally, Tsoureki is made with all of the rich, luxurious ingredients that Ort... 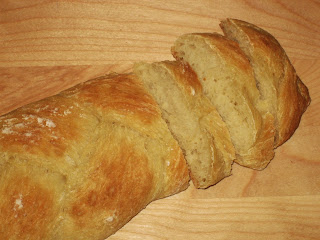