This soup offers the best of several worlds. It is unbelievably easy to make, delicious and satisfying to
eat, and frugal. It also passes the kid-approval test in our house : )

I've been making it for years, but this year I simplified the method even more, and made it into a dump dinner - so it can be prepared with no hassles.

You make it from dry beans, but it requires no soaking : )

I like to serve it with optional toppings: Rice to scoop on top, Sriracha for those who like a little heat, Fresh chopped tomatoes or Salsa, and Tortilla Chips. Avocado is also a delicious topping with this soup.

For those who aren't vegan, or who aren't doing Lent, you can also offer Sour Cream and Mexican Style Shredded Cheese toppings, or even some Kielbasa slices.

In a Quart Zipper Bag (or similarly sized Plastic Food Storage Box) Place:
1 Can (15 oz) Chopped Tomatoes, with their liquid
1/4 Cup Dry Wine (any Color - may be omitted if you don't do wine)
Contents of 1 Packet Taco Seasoning, or 2 Tablespoons Homemade Taco Seasoning

The day before, put the bags in the refrigerator to defrost.

The day you want to enjoy the soup, remove the small bag, and leave it in the refrigerator. Put the contents of the large bag in your slow cooker or crock pot.

Cook on high till beans are very tender - about 5 hours

Add contents of small bag, and allow to warm (about 20 minutes - while you make the rice and set the table)

Then, Blend the soup with an immersion blender. I like to leave some of the soup chunky - with some whole beans, so I don't blend it until it's completely smooth, but I stop blending when it has reached my desired chunky-ness level : )

Serve in Bowls with above listed toppings to be added by each diner.

Need a delicious soup to come home to in the evening?

This is a great one to put in the slow cooker or Crock Pot, and come home to after Lenten services, or some other time that you need dinner to be ready when you are.

This is how to make it:

Label, Seal, and Put bag in freezer.
The day before you use it, put it to the fridge to thaw.

To Prepare:
Add Contents of bag to slow cooker with
7 Cups Water
Cook 5 Hours on High

To serve:
Puree with Immersion Blender &Season with the following
(put more of these on table for diners to season to taste):
1 Tablespoon Lemon Juice (to brighten flavors)
1 1/2 teaspoons Garlic Salt

Can be served with Crusty Bread, Rice, or Tabbouli, and Garden Salad or Crudites

This is being shared on:

Orthodox Lenten Menu 2021, with Less Time in the Kitchen

This year, Orthodox Christians celebrate Pascha (Easter) much later than do Catholic and Protestant
Christians. While others are about half way through Lent, our Lent just started on March 15.

Orthodox Lenten foods exclude meat, poultry, most fish, dairy, and eggs. In other words, mostly Vegan foods. This menu is all Vegan, with an emphasis on reducing your time in the kitchen, and your money spent on foods, so that you can focus on the tasks of Lent - Prayer, Fasting & Almsgiving.

If you really hate cooking, but still want to observe Lent, check out this post:

40 Day Lenten Menu for People Who Hate to Cook

If you have family members who do not observe Lent, and you need to prepare food for them, check out these posts:

Month of Meals for Vegan and Omnivore Family

This year's Lenten menu is a simple double. I made a three week plan, and then repeated it for a full Lent worth of recipes. Many of these recipes can be doubled for the freezer, so I'll make a note by each one to give freezer ideas. If you play it right, half the days of Lent (which can be quite busy with services!) will be almost cooking-free : )

1. Lentil Soup over Spaghetti (Double Lentil Soup and Blend it to Freeze. Serve with Vinegar on Holy Friday)

2. Bamies Yachni (Quadruple Sauce, and add to Peas & Artichokes, and to Revythia, and Gigantes to serve later in Lent. For the second 1/2 of Lent, you may want another quadruple batch of sauce)

3. Chinese Stir Fry Over Rice (Cook Extra Rice for Freezer, but veggies must be made fresh)

5. Calzone Casserole (Make Extra Bread Mix to use later - you can use it to make breadsticks to go with Spaghetti, or with a number of other meals)

7. Spaghetti (you can make noodles in microwave & use jarred sauce, or make homemade sauce & freeze half) Use your Bread Mix from day 5, if you like.

11. 10 Minute Lazy Day Lo Mein (This is a super easy recipe, but still, it is possible to freeze cooked spaghetti & veggies to use later, if you like & have the freezer space)

15. Moujendra (This may be doubled & frozen)

18. Pad Thai (cannot be frozen - needs to be made fresh each time)

19. Tabbouli & Lentil Salads (Grains & Legumes may be doubled & frozen for later use - then after thawing, add fresh veggies & dressing)


And, of course, even during Lent, sometimes you need a little treat. Many Converts to Orthodoxy are shocked to find that sugar is not one of the foods on the forbidden list (though, without a doubt, it should not be overindulged in during Lent).

To keep our easy cooking theme, I'll share one of my more popular easy desserts -


Posted by Anna@stuffedveggies at 5:21 PM No comments:

The Story of Mrs. Good and Mrs. Bad (with 4 Lenten Menu Plans)

The Ladder of Divine Ascent, as depicted at Kykkos Monastery, Cyprus There is an old traditional Greek Orthodox story that I recently rea... 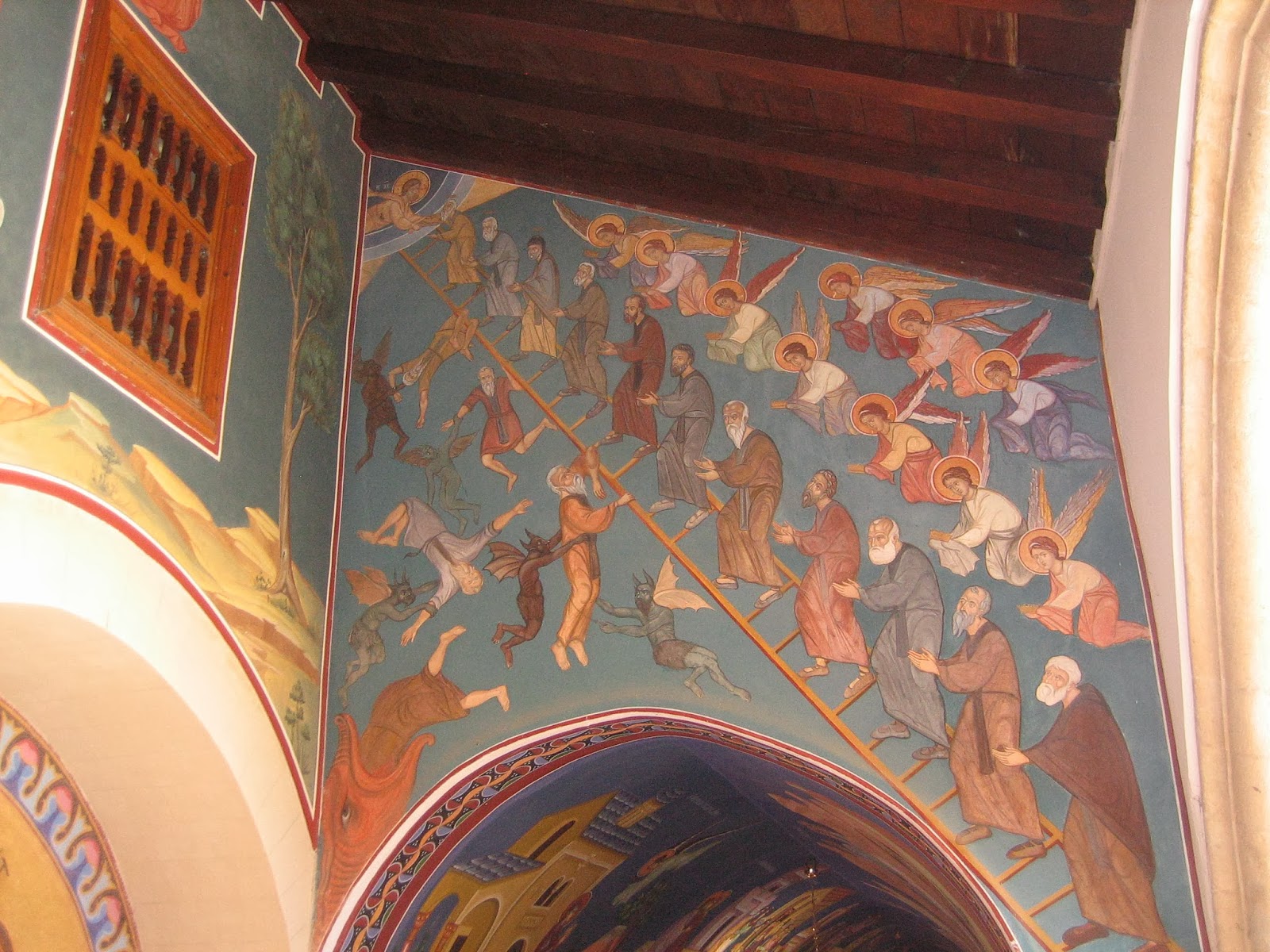