This is an everyday favorite soup in our house. It's filling, tasty, packed with nutrition & not packed with calories. A win-win sort of soup.

I like to have it as an appetizer course, a light meal with some bread, or even as a side dish (I can't be the only one who gets tired of salads and steamed veggies in the side-dish spot, can I?).

It's called "Moroccan" because it uses spices typical of that cuisine, not because the recipe itself actually comes from Morocco.

It's easy to make a big batch, and freezes well in single portions so that you can have a nice bowl anytime the mood hits you!

I LOVE to garnish this one with Sambal Oelek, which is a wonderfully complex hot sauce with a relish-type texture. Use another favorite hot sauce if desired.  My little girl loves it with no hot sauce at all.

This is being shared at:
In & Out of the Kitchen
Virtual Vegan Potluck
Posted by Anna@stuffedveggies at 8:00 AM 6 comments: 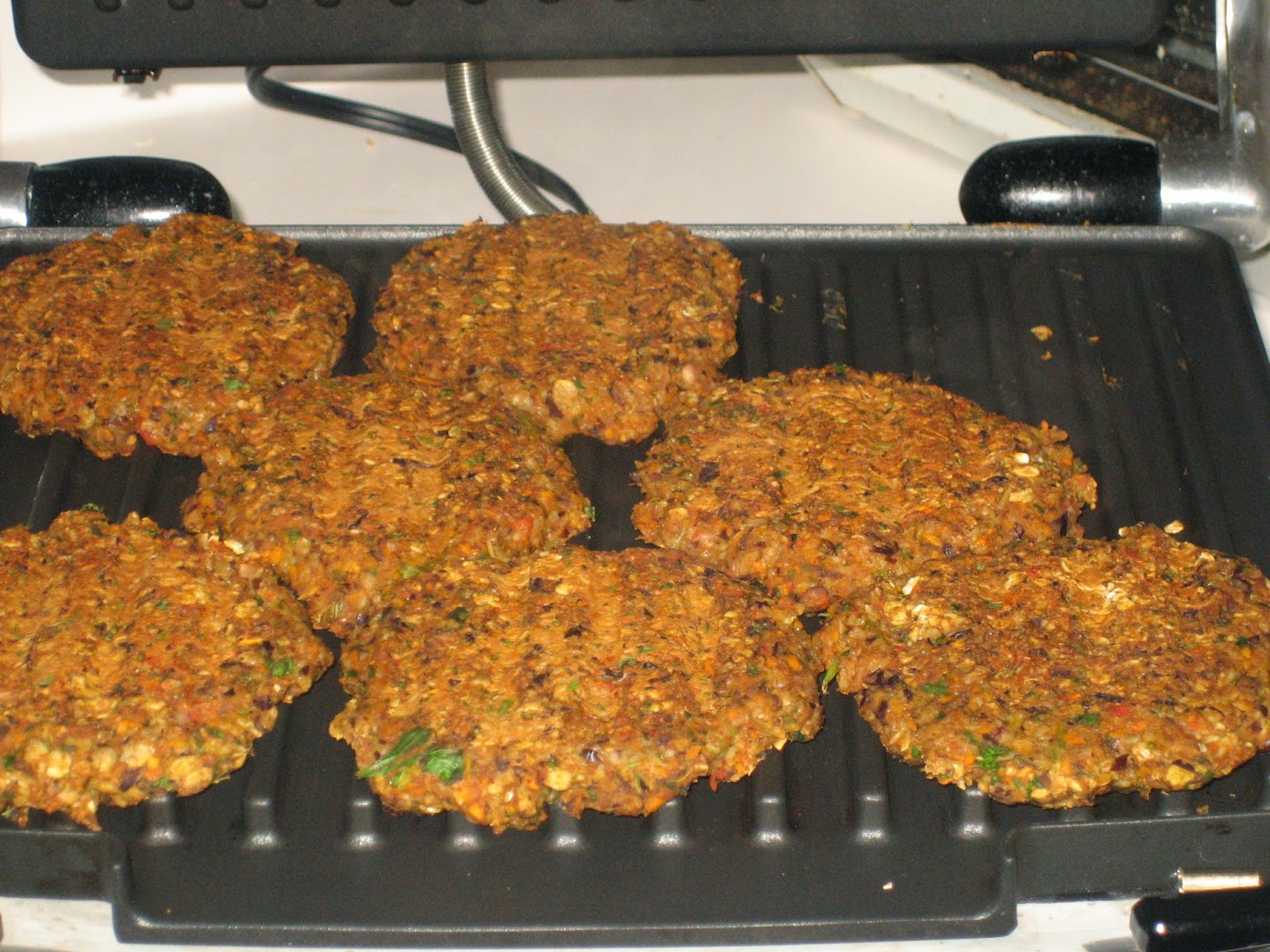 These Black Bean Burgers are so simple to make, and tasty. They freeze well, too, so that you can keep them on hand in the freezer for times when you want a quick meal.

You can either serve these with traditional burger toppings, or you can be inspired by the "Southwest" theme and top them with your favorite Southwestern ingredients, like Salsa or Guacamole.

Southwest Black Bean Burgers
Adapted from a book by Dr. Caldwell Esselstyn (I don't recall which book - but I highly recommend all his books!)

Pulse  in food processor till chopped up, but NOT until it becomes a smooth puree:*
1 (15 oz) can black beans, drained in Sieve
OR 1 1/2 cups home cooked Black Beans
1 (15 oz) can Diced Tomatoes, drained in Sieve
1 cup chopped Carrots
1 cup cilantro (or a 1/2 bunch - the measurement doesn't need to be precise here)
1 Tablespoon Taco Seasoning
Stir in
2 1/2 cups Oats**
Form into patties
Cook on Nonstick Electric Grill (such as a George Foreman or Wolfgang Puck model) for about 10 minutes, till firm
OR
Bake 400 degrees on cookie sheet, 8 minutes, turn, bake 2 minutes more.
OR, cook in nonstick pan

*My food processor is a small model (2-3 cups capacity) so I pulse these things in batches, then stir them together with a spoon.

** I use whatever sort of oats I have on hand. If I'm using Old Fashioned Oats, I put 1/2 cup of total amount of the the oats into the food processor and grind them to a powder - this helps the burgers stick together. If using quick oats, I just use the entire measurement as-is.

Freezer/Bulk cooking tip: These burgers may be made in advance & frozen for when you need them. They can be frozen either cooked, or raw! If you cook them before freezing them, wrap them in double layers of waxed paper (or your other favorite method to keep them from sticking together when frozen), then simply reheat briefly in microwave when you're ready to eat them.

If you prefer to freeze them raw, wrap them in double layers of waxed paper (or your other favorite method to keep them from sticking together when frozen), and just pop them into your favorite electric indoor grill to cook - no need to thaw before cooking! : )

Tip for dining with Omnivores: Of course, traditional Hamburgers are great to serve to the Omnivore at your table, when the Vegans are eating these.

Why I Ditched My High Speed Blender

One of the distinctives of my blog is a focus on frugal, healthy cooking. Perhaps you've been led to believe that healthy cooking requires expensive equipment like a high-speed blender. If you're trying to decide whether you need one of these devices, perhaps my experience will help you decide.

Many years ago, we had one of the coveted High Speed Blenders. It was a Vita Mix. When we first got it, we were totally sold on its benefits by the infomercial-style salesman at the state fair exhibit hall. Why, it could even take a WHOLE RAW EGG and grind it up smooth- shell and all - so that you could add it to a smoothie! We were convinced that it was a "must have" to make lots of delicious food. I have to say that when we bought it, we really weren't very healthy eaters. Not at all, in fact! But, we were sold on the idea that owning one of these appliances would make our diet healthier. It didn't.

Over the years, I became more and more interested in home cooking and preparing whole foods. Over time, I stopped eating meat & became vegetarian, I reduced my junk food consumption, I increased my whole foods intake, I lost a fair amount of weight. And, as all of this happened, I found that I didn't use my high speed blender more, on the contrary, as all this happened, I used it less.

First, it lost its prime real estate on my kitchen counter,and it was relegated to a cupboard. Then, as I found I used it less and less, it lost its place in the cupboard, and was exiled to our storage room. Once in a long while, I would pull it out to do some job that it seemed particularly well-suited for, only to find out that it was no more effective at the job in question than my other kitchen tools, but it took up a lot more space, and could perform fewer functions than the others! Finally, I decided to simply give it away- and that's what I did!

Why did it keep getting demoted? I found that other, smaller & cheaper kitchen appliances were not "just as good," but rather, they were BETTER!

If I wanted to make Hummus or another thick dip or spread, my little food processor could do the job faster & better (over the years, I have had three different small food processors that hold 2-3 cups of food - my current is a Sunbeam Oskar similar to this one - I got it at a thrift store for $2.99). I had to stop the high speed blender and scrape down the sides repeatedly, but the small food processor didn't require this special treatment. I could gradually add liquids to either machine as it ran if I needed it to. And, the small Food Processor could also chop, slice or shred a variety of vegetables much more effectively than a blender could!

If I wanted to puree a hot soup, I had to risk splashing myself with boiling liquid to do it in the high speed blender, or I could simply stick an immersion blender (also known as a stick blender - pardon the pun) in the pot and do it on the spot. (I have a Braun similar to this one that I bought at a thrift store - brand new still in the box - for 2 or 3 dollars). Even better, the immersion blender is super-easy to clean in the sink - whereas the high speed blender was a tough cleaning job. (The salesman said you could just blend soapy water in the machine & rinse - but  that cleaning method wasn't always so effective for us.)

If I wanted to grind a grain or spice (which, let's face it, is a pretty rare need in most kitchens), I can always pull out the coffee grinder - once again - a purchase that was 2 or 3 dollars. And, as it is a smaller machine, I don't have to fill it so full to reach the blades - that's a real advantage when grinding spices.

The salesman said that the machine could crush ice - and it can - but the cubes get caught under and around the blades now and then and have to be dislodged - which isn't always easy. We found ourselves resorting to our previous smack-with-a-heavy-ice-cream-scoop method.  And, let's face it, who wants to pay a few hundred dollars for an inefficient ice crusher?

So, after years of wanting to love our High Speed Blender - and hearing from others how wonderful it was - I finally concluded that I simply had no use for one.

Now, I understand that there are fancy models that can freeze your smoothie while they blend it, but if I keep my bananas in the freezer, I can just make the frozen smoothie in my food processor - and I don't have to worry about the bananas spoiling if I don't get to them fast enough.

And, similarly, the fancy models can heat my soup while they blend it. But, it's a simple matter to heat my soup on the stove top, and the immersion blender is so much easier to use & clean! And, I don't like all of my soups pureed, anyway.

Now, when I see people share that they are trying to save up several hundred dollars to afford a High Speed Blender, I cringe inside.  I haven't found a single kitchen job that can be done by a High Speed Blender that cannot be done more easily, conveniently, and cheaply with standard kitchen equipment. It is true, the high speed blender does do one job my other machines can't. It can grind a raw egg with its egg shell - but I don't eat raw eggs or egg shells! Truth of the matter is, I have absolutely no need to grind up a whole raw egg, shell and all, and add it to a smoothie!