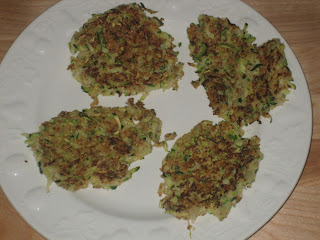 This vegetarian recipe has been around for years. I used to make it years ago, after finding it in a Seventh Day Adventist Cookbook (sorry, I cannot recall which one). When I went Vegan, I jettisoned the recipe because it had eggs. But, I recently surfed by a blog that featured it, and was reminded how tasty it was. And I thought, "Why can't I veganize it? Shouldn't be too tough."

This is a light, summery recipe that isn't too filling. If you'd like something more substantial, it would go well with oven fries (or French Fries, if you eat them) as well as some bread & salad.

Of course, if there's a way that you're accustomed to eating Crab Cakes, these can stand in nicely.

Mix everything together, and form into patties & cook till golden brown in a non-stick skillet lightly sprayed with oil. If they fall apart when you turn them (they are very delicate) just press them down with a pancake turner or spatula and they will stick right back together.

*A note about Old Bay Seasoning: This seasoning blend is found at or near the seafood counter in most grocery stores (rather than in the spice section) - leading many a shopper to conclude that their grocery doesn't carry it, when it really does.

Years ago, in my pre-vegetarian days, I worked at a well-known seafood restaurant - the kind of place that, while informal, would inspire people to fly in from another state for dinner. They relied heavily on Old Bay Seasoning.  They boiled their seafood in water seasoned with the stuff. One day, I tried to boil seafood at home, but I felt I couldn't afford the Old Bay seasoning (which is quite reasonably priced, really)- so I omitted it. To my shock, the seafood didn't "taste like seafood!" This seasoning blend is what a lot of people associate with the taste of seafood. If you're living abroad and cannot purchase this seasoning, you might try making your own from a recipe like this one, but I cannot vouch for its authenticity.

This is being shared on Simple Living Wednesday and Healthy Vegan Fridays and Clever Chicks and Everyday Entrees for Around $5.